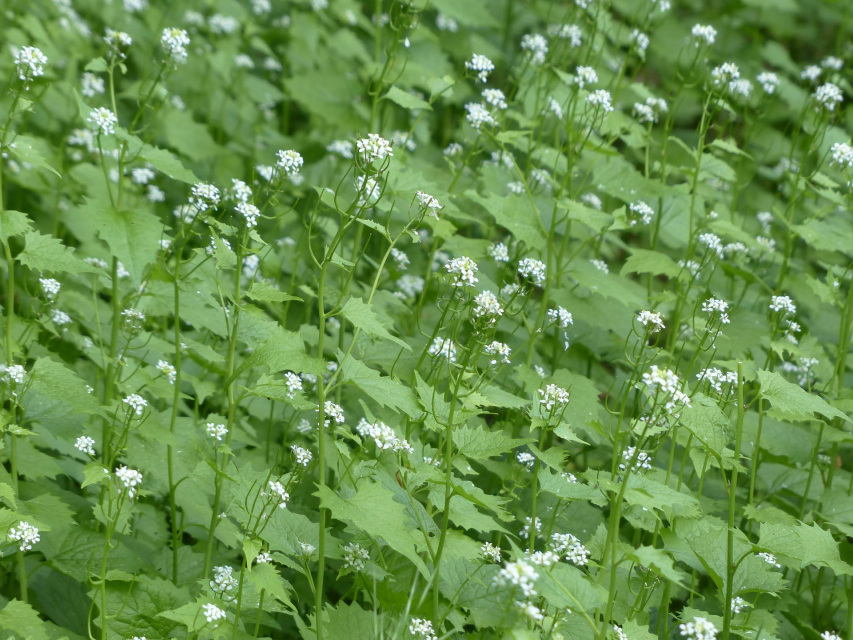 Garlic Mustard (Alliaria petiolata) is a member of the Crucifer family native to Britain and much of Europe and Asia. As its name suggests it smells faintly of garlic. It's biennial, its seeds germinating early in the spring after being exposed to a cold spell, the early leaves being rounder and forming a basal rosette that lasts over winter; in the second year it sends up a long, straight, unbranched flowering stem on which the large leaves are more triangular, with clusters of small white four-petalled flowers appearing in April and May, attractive to insects in search of an early nectar boost. The early leaves have been used in salads or as a flavouring for fish or meat dishes.

it will grow readily in a semi shaded location such as a hedgerow or river bank, where the soil is damp and fertile. but may have problems if there is a lot of competition from other plants, and may benefit from a bit of disturbance of the soil to let its seeds germinate and seedlings get a head start over other species. Ironically over much of North America it is regarded as an obnoxious European invader as it competes too well with the native fauna.

A must-have plant for any wildflower garden as it is a main larval food plant of the Orange-tip butterfly that is observed flitting to and fro along our hedgerows in early spring, particularly on damper more open sites such as riverbanks. The female which lacks the orange tips of the male lays her eggs, just one per bud on Garlic Mustard and sometimes Lady's Smock growing in a sunny spot, usually against a loose hedge. The emerging offspring eat the seed pods along with their seeds. There is usually only one brood per year, the caterpillars taking early retirement at the end of summer and hibernating as chrysalises on a plant stem.

Garlic Mustard is also a main foodplant for the caterpillars of Green-veined White.

You are purchasing three first year plants in three 7 cm square pots. Transferred to the soil, these may flower the first year but are more likely to do so the following year.

If saving seed for sowing elsewhere, remember that the seeds germinate best if subjected to a cold spell. If its the wrong time of year for this to occur naturally, soak for a few hours in warm water, mix with sand, drain and place in a plastic container in the fridge at around 4C for about a month. Then sow as usual.

Please note that our plants are sold purely for their biodiversity, educational and aesthetic value and no part should be consumed or applied externally unless you are absolutely certain of their safety.

Please note also that our nursery is located at Cupar, Fife, our St Andrews address being for correspondence only. Plant Passport Registration Number GB-S 03473.

Add to Cart
​he Crucifer family is familiar to most of us as boiled vegetable greens, as it includes crops like cabbages, broccoli, brussel sprouts, cauliflower and kale, all of which have been bred from far more modest wild species.

Although Cabbage White butterflies have a great liking for the leaves of these horticultural varieties when kindly presented to them by optimistic gardeners, most related butterflies have remained loyal to wild hedgerow crucifers. These include Garlic Mustard (Alliaria petiolata), Charlock (Sinapsis arvensis) and Cookooflower (Cardamine pratensis) often known as Lady's Smock, all of which produce succulent seed pods - as indeed would the domestic cabbage if allowed to reach maturity - and it is these seedpods which the caterpillars consume, rather than the leaves.

Garlic Mustard and other crucifers growing on the south-facing side of a loose hedge are ideal, and that's the best place to plant them to encourage butterflies like the Orange-tips. As Orange-tips live in colonies and rarely venture far away, to stand a reasonable chance of attracting them to an unoccupied hedgerow on your land there needs to be a colony nearby. Alternatively once a new habitat is established, or an old one restored, it may be possible for a conservation group to introduce Orange-tips as eggs or caterpillars. The Small White is more free-ranging and likely to find your offerings.
INCREASE BIODIVERSITY BY GROWING GARLIC MUSTARD AND OTHER CRUCIFERS TO SUPPORT THE WHITE BUTTERFLIES.