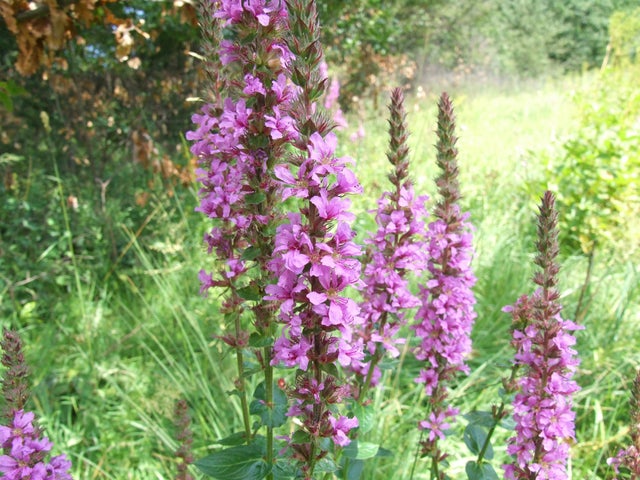 Purple Loosestrife (Lythrum salicaria) is a native, water-loving plant that sends up a striking array of spikes over a metre tall of vivid purple-pink flowers in any wet habitat such as meadows, marshes and riverbanks, or a garden pond.

The first part of the scientific name Lythrum means blood, referring to its colour, while salicaria refers to the similarity of the shape of its leaves to those of willow.

Loosestrife refers to its use to calm down oxen at the plough.

A native of, and found throughout the British Isles, it was introduced into America in the early 19th century as an ornamental garden plant. At the present time we get so many of our own ornamental garden plants from America, Japan, China, anywhere but from right here in Britain. Why do wild plants seem to be so much more appreciated in the countries in which they don't grow naturally compared to those in which they do?

If you live in Britain and have a large garden, Purple Loosestrife makes an ideal garden plant, especially for the margins of a garden pond or a moist herbaceous border, producing a blaze of colour from around June through to September, and getting your garden buzzing.

Purple Loosestrife will attract long-tongued insects to your garden, such as bumblebees, the Elephant Hawk-moth and Brimstone Butterfly in search of its nectar.

In addition, its leaves are eaten by both larvae and adults of a beetle named after it, the Black-margined Loosestrife Beetle (Galerucella calmariensis).

A single plant can produce up to two and a half million tiny seeds that can be carried in wind and water. Though tiny, i was able to take the picture of them using an ordinary lens on a DSLR camera with a couple of expansion rings between the lens and the body of the camera.

If you wish to give them a try, you can purchase THREE well rooted plants in 7 cm pots which we have grown from the native seed illustrated, in peat-free compost.

As they are hardy perennials that will grow and flower year after year, their roots will survive the winter, so they can be purchased at any time of year, They will grow well in full sun or partial shade, in damp ground, preferring neutral to acid soils - in contract to another purple spiked damp-loving flower, Great Willowherb (Epilobium hirsutum) which does best in neutral to basic soils.

Tip: pinching out the growing point will make them grow bushier and produce even more flowers.

Our plants are sold purely for their biodiversity, educational and aesthetic value and no part should be consumed or applied externally unless you are absolutely certain of their safety.

Please note that our nursery is located at Cupar, Fife, our St Andrews address being for correspondence only. Plant Passport Registration Number GB-S 03473.