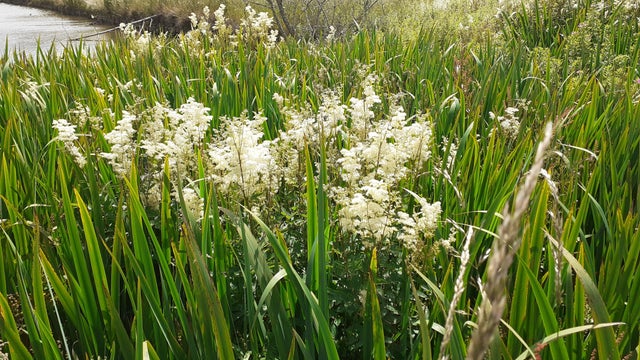 The name tells us a lot about this plant - sweet smelling and growing in damp meadows. I took the picture of the frothy, creamy-white flowers of Meadowsweet growing amongst the irises at the edge of the pond on the North Haugh at St Andrews University, Scotland, in mid July 2020. In the picture with the blue sky it was growing on the cliffs at nearby Kinkell Braes. The long straight leaves are those of the Irises; the actual leaves of Meadowsweet are shown in the separate picture.

Meadowsweet used to be known as 'meadwort' because it was used to flavour mead, an alcoholic drink made by fermenting honey and fruit juices. Today an infusion of meadowsweet flowerheads is often used in cooking to flavour foods, and the dried herb is sold as a herbal 'tea'.

We often associate Willow bark with Aspirin, but the flower heads of Meadowsweet are also rich in salicylic acid, from which acetylsalicylic acid, more commonly known as Aspirin was made in the 1890s. In fact the name Aspirin is derived from the old Latin name of Meadowsweet Spiraea ulmaria. (A for acetylation, spir from the name of the plant, and in a general drug ending).

Meadowsweet had long been used to treat the sort of conditions we presently take aspirin for, and still is for that matter; overconsumption, however, carries the same risks of intestinal bleeding as aspirin, especially in people on anticoagulant therapy, so care should be exercised, and it should not be taken by children, pregnant women and those with asthma.

Salicyclic acid is now synthesised chemically and does not have to be extracted from willow bark or meadowsweet flowers.

If you want to experience the joy of growing this attractive sweet-smelling plant in a damp area of your garden or greenspace we can start you off with sets of 3 well-rooted plants in 7cm square pots, that we have grown from seed.