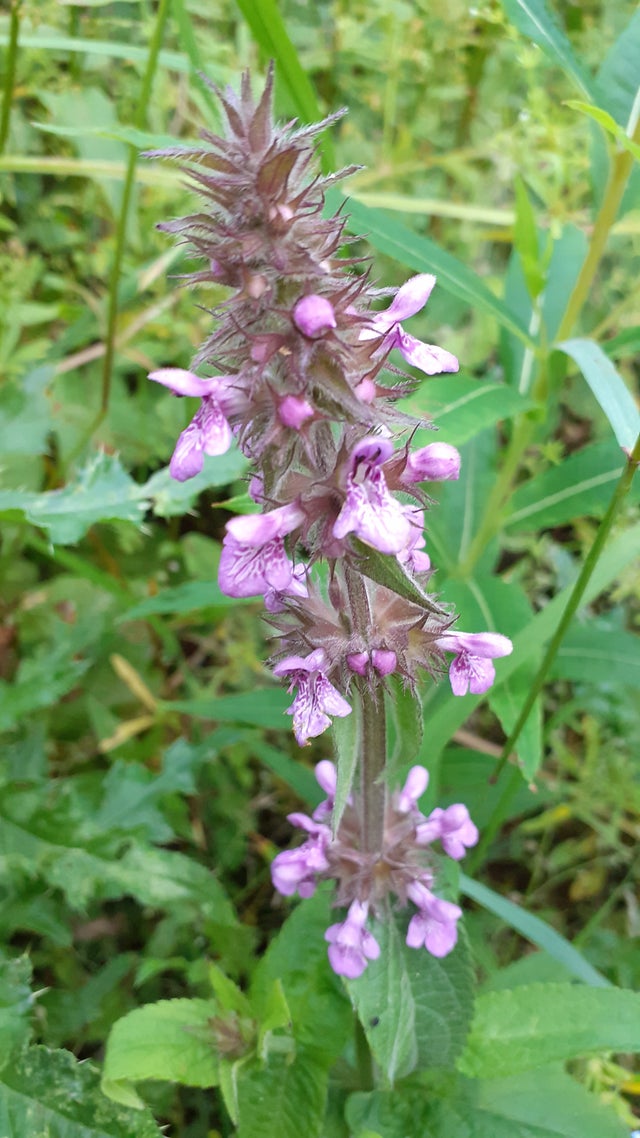 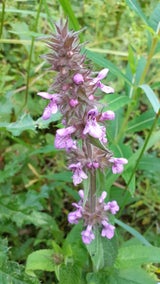 It has had many uses over the years in medicine, as food, and in dye making. The stem is hairy with long straight hairs that point down at an angle of about 45 degrees, making it difficult for small insects to crawl up the stem towards the growing tip, in contrast to the more random positioning of most hairy plants. The leaves are narrowly oblong, the lower ones having a short stalk which is lacking in the upper leaves.

Its name 'Woundwort' alludes to its traditional use in staunching bleeding and healing wounds.

It produces elaborately patterned reddish-pink flowers in spikes up to a meter high that are especially attractive to bumble bees. The seeds can be either self-pollinated or insect pollinated and in common with many water-side side plants are mainly distributed by water, remaining buoyant for several months in stagnant water.

A common plant of damp places, such as the banks of rivers and ponds, Marsh Woundwort makes a good marginal plant for your pond or any damp area. It grows well in either full or part shade. It is fairly common throughout Britain, but can be crowded out by the introduced Himalayan Balsam (Impatients glandulifera) which grows in similar areas.

I took the photographs of Marsh Woundwort growing on a shady, damp area of land close to a stream running alongside our wildflower garden at Cupar, Fife.

A member of the mint family, it's flowers are a particularly valuable nectar source for bumblebees. It's flowers are also visited by solitary bees while the larvae and/or adults of several species of beetle feed on its leaves. Amongst the insects you might be lucky enough to find feeding on the leaves are the Green Tortoise Beetle (Cassida viridis) and the weevil, Ceutorhynchus urticae. It is also one of the main food plants of the colourful Garden Tiger Moth (

It is a perennial that once planted should reappear year after year, as it spreads by producing large numbers of rhizomes just below the surface that throw up new plants, even if there is no bare ground for its seeds to land on. In a flower pot it has a habit of sending out new leafy stems from the holes in the bottom as well as from the surface of the soil.

You are purchasing three well-rooted plants in 7 cm square pots which can be kept ready for planting out once the weather is right. The plants are sent to you in recycled and recyclable packaging.

All of our plants are grown from seed either purchased from reputable suppliers of wild flower seed in England and Scotland, or increasingly, from flowers growing in our own wildflower gardens in Fife, Scotland.