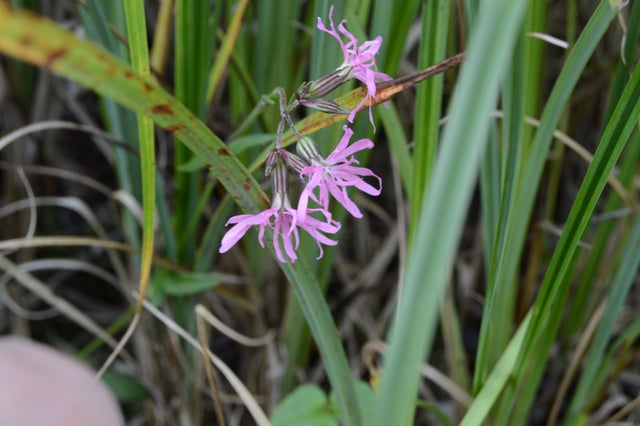 The bright pink flowers of Ragged Robin (Lychnis flos cuculi) provide a bright flash of colour in the spring, at the same time as the cuckoo, hence its fancy scientific name Lychnis (light), flos (flower or bloom), cuculi (cuckoo). Its English name refers to the petals, each being cut into four strips, and its Robin's breast-like flash of colour.

It is most often found in damp meadows, hedgerows, or marsh, so as might be expected, it is getting rarer as its natural habitat disappears. I took the photo of this rather late flowering individual at Barnyards Marsh, a Scottish Wildlife Trust Reserve, at Kilconquhar, Fife, on 5 September, It also looks good at the edge of a garden pond and doesn't mind getting it's feet wet. Its a member of the family Caryophyllaceae that includes pinks.

Like Soapwort, another of our wildflowers, Ragged Robin has lots of saponins in the leaves and root which can be extracted into boiling water and used as a soap for cleaning textiles. Most plants have some means of protecting themselves from being eaten by insects. Ragged Robin in common with many plants of the same genus produce chemicals similar, or even identical to the ecdysteroids, a kind of insect hormone involved in moulting, which appears to offer some protection to the plant.

Ragged Robin is pollinated by bees and flies and butterflies, as they feast on the nectar and pollen, and it is a larval foodplant of at least two species of moth caterpillar, the Campion (Sideridis rivularis), which also feeds on White and Red Campion, and the Lychnis (Hadena bicruris), both of which feed on the seed capsules rather than the leaves.

Buy pots of Ragged Robin at any time of year as it is a perennial, and the plants can be kept growing in a coldframe or plastic greenhouse over winter and planted out in spring, Buy more to take full advantage of the flat rate postage option of £2.95.

You are purchasing THREE well-rooted plants in 7 cm square pots, which we have grown from native seed. As well as the seeds which are shot out of the capsules onto the surrounding soil, it can also be propagated by division, as the main rosette of leaves at the base of the plant creates daughter rosettes which can be separated and planted separately.

The postage charge is the same regardless of the number of packs of Ragged robin you purchase.