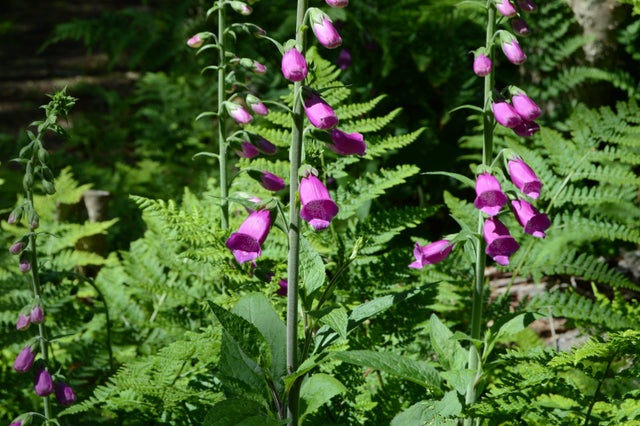 Perhaps Our Most Striking Wild Flower

Is there a wildflower more impressive than the Foxglove (Digitalis purpurea) with its long spikes of large bell-shaped purple-blue flowers, attractive to pollinating insects. A woodland plant it is a great one to brighten up shady areas of the garden.

It is biennial, forming a rosette of leaves in its first year and flowering the next.

The rosette of leaves is very hardy and will remain green throughout all but the harshest of winters, so can be planted out at most times of the year. Even if the leaves do die down, the roots will conserve their energy for rapid growth of fresh leaves in spring. It will often continue flowering for more than one year and produces copious amounts of seed so new plants are likely to appear if they land on a patch of bare soil.

As well as its obvious value as a source of nectar and pollen for bees and other insects its biodiversity value is enhanced by being the caterpillar food plant of the brightly coloured Foxglove Pug (Eupithecia pulchellata), a brightly coloured moth with alternating bands of grey-brown and buff-orange on its forewings that feeds, not on its leaves like most caterpillars but inside its flowers on the stamens and seeds.

The photos of Foxgloves in flower were taken in the fairly dense deciduous woodland at Magus Muir, near St Andrews, Fife, in July 2020.

Foxgloves had long been used as a folk medicine, but in the 1780s, a Scottish doctor by the name of William Withering established that extracts of the dried leaves were extremely effective in the treatment of certain kinds of heart disease, including congestive heart failure by increasing the strength of the heart beat. Several of the active chemicals, including Digoxin and Digitoxin are in widespread use today.

Despite the discovery having been made in Britain using British foxgloves Brazil is now the main source, with fields of foxgloves, usually the related species Digitalis lanata, being cultivated for the purpose. Yet another missed opportunity to benefit commercially from our native flora..

The amounts of active drugs present in the leaves varies enormously between individual plants so the active drugs have to be extracted and levels standardised by pharmaceutical companies before use.

Another native wildflower know to contain cardiac glycosides is Lily of the Valley (Convallaria majalis).

Beware that all parts of both plants are poisonous if eaten, so keep them away from the herb garden!

You are purchasing three WILD Foxglove plants (NOT a cultivar) one in each of three approximately 7 cm square pots, that we have grown from seed sourced from a UK grower.

To keep it going in subsequent years you will need to make sure there are some patches of bare soil where its minute seeds can germinate.