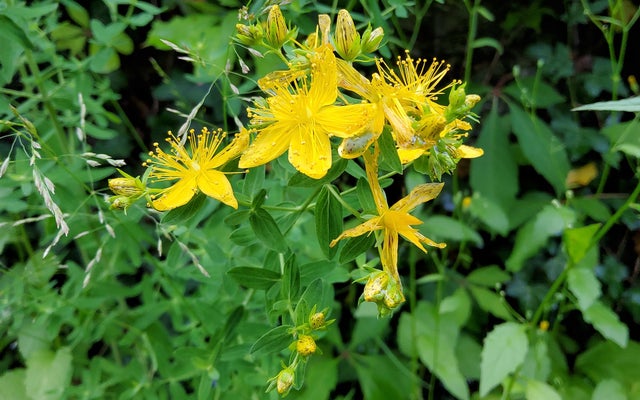 Perforate St John's Wort (Hypericum perforatum) is a British native perennial in flower from June to September. Its a relative of several other Hypericums that are grown as garden plants. The perforate part of its name comes from the many translucent dots that are revealed when the sun shines through its leaves. It can develop a deep root system which enables it to extract water from below the surface of dry soil.

Its bright, five-petalled yellow flowers provide a good source of nectar and pollen for bees and hoverflies.

The caterpillars of a tiny moth by the name of Ectoedemia septembrella (wingspan 5-6mm) specialise is eating Perforate as well as St John's Worts, and other Hypericums like Tutsan. The larvae mine the leaves, remaining concealed between the leaf surfaces as they feed, visible to us as a line and a large blotch on the leaf.

Another, slightly bigger moth (wingspan 9-12mm), attractively coloured with orange or yellow markings on a metallic grey background, Euspilapteryx auroguttella, also specialises in Perforate, Slender and other St John's Worts. It too initially mines the leaves, eventually producing a blotch or folding of the leaf tip.

You are purchasing three well rooted plants in 7 cm square pots grown from seed in our nursery in Cupar, Fife. As it's a perennial it should continue sending up new shoots from its rhizomes year after year, as well as producing copious amounts of seed which can remain viable in the soil for several years.

Plants are carefully packaged in clamp packs made from recycled plastic which is itself completely recyclable.

Our plants are sold purely for their biodiversity, educational and aesthetic value and should not be consumed unless you are absolutely certain of their safety.

Please note that our nursery is located at Cupar, our St Andrews address being for correspondence only. Plant Passport Registration Number GB-S 03473.