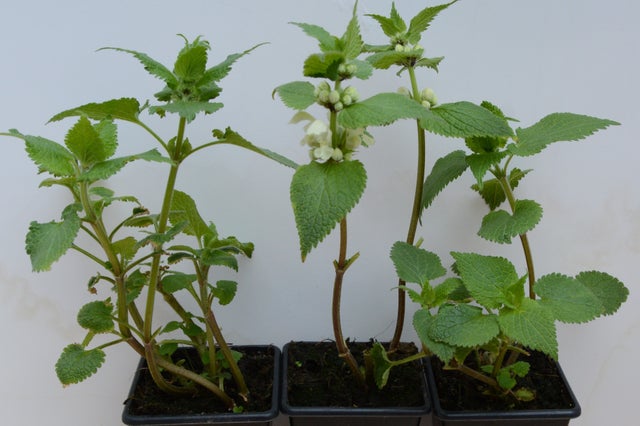 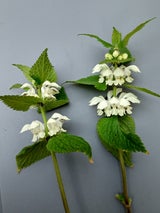 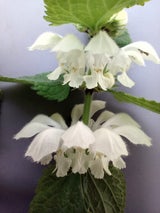 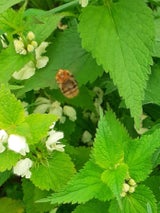 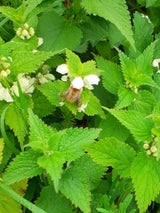 White Dead-Nettle (Lamium album) has a long flowering season from as early as March up to as late as November, producing bunches of attractive white flowers with a hint of green that have been likened to an Elizabethan neck ruff. It tends to grow in moist areas of open shade. Grown in the garden, It makes a good cut flower to include in a small table decoration. Don't worry about the nettle part of its name, it doesn't sting, hence 'dead' nettle.

Its long flowering period means that it is a good source of nectar for bees at times when there may be little else available, the petal at the base of each flower forming a landing stage for bees and other pollinating insects. Carder bumblebees, like the one I snapped at our nursery are often seen feeding on the flowers of dead-nettles and foxgloves.

It is a main food plant of a very attractive, colourful, luminescent beetle, the Dead- nettle Leaf Beetle (Chrysolina fastuosa). Caterpillars of the Garden Tiger and Angle-Shades Moth also feed on the leaves. Carder bees are often seen feeding on

You are purchasing 3 well-rooted White Dead-nettle plants in 7 cm square pots ready for planting out. They are perennial and spread by means of stolons to form a small clump of flowers as the season progresses. They have been grown at our nursery in Cupar, Fife from our own stock.