Not All Butterflies Drink Nectar

It is easy to imagine that all adult butterflies and moths fuel their flight by drinking nectar. Not so. Many species of butterfly are woodland dwellers feeding on sap and aphid honeydew. They rarely if ever touch the sugary nectar offered by flowers.

These are all fairly rare species confined to deciduous woodland in southern England. But there is one more common and widespread butterfly, the Speckled Wood, familiar in wooded areas throughout much of England that specialises in honeydew for most of the summer, only turning to flowers like Bramble and Ragwork early and late in the season when there are less aphids around.

Some of our most common nectar-feeding butterflies like the Peacock, Red Admiral, Green Hairstreak, and Holly Blue will also take honeydew when it's available, along with their nectar.

Butterflies that feed primarily on honeydew like the Speckled Wood typically have shorter tongues than those that feed on nectar. This means that when they do turn to flowers, those that produce their nectar at the bottom of deep florets are inaccessible to them, and they are often seen feeding on the flatter florets of flowers like Ragwort and Wild Privet.
A Taste for Rotting Fruit
Some kinds of adult butterfly indulge in yet another alternative to nectar, namely rotting fruit. The photo at the top of the page shows a Red Admiral indulging in its well-known activity of sucking the juices from a rotting apple. They obligingly wait until the fruit is on the ground and of no use to us before tucking in.

Butterflies that feed on honeydew and rotten fruit instead of nectar often have modified proboscises with a sponge-like structure at the ends which enable them to soak up this kind of food.

Sweat and Soil
As well as snacking on sugary drinks, many kinds of butterfly take fluid from mud, like those in the picture, or sweat from your hand, presumably attracted by the salt content as well as the water itself, or less salubriously from dung or carrion. 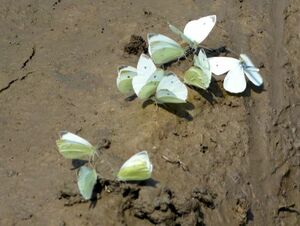