Why Include Grass with the Flowers?
There is a lot of interest in wildflower meadows, grassland full of pretty flowers for butterflies. We know that the flowers provide nectar, whereas grass doesn't, so what does the grass do? Do we really need the grass? After all, it seems to be everywhere, choking out the wildflowers, so why sow yet more of it?

Existing Grass
It may be that the grass is there already, great swards of it in our fields, parks and gardens, but if we find the thought of getting rid of it completely too daunting, we may just try to liven it up, make it more biodiverse by adding wild flowers. That's great.

What Butterfly Caterpillars Feed on Grass
The grass itself will only attract those butterflies whose caterpillars actually feed on grass - only about one in five of our native British species do so. Most have other tastes. But there is a group of butterflies, comprising many of the Browns and a few Skippers, whose caterpillars do have a taste for NATIVE GRASSES.

Native not Agricultural
Note the emphasis is on NATIVE GRASSES, not bullying agricultural varieties like Ryegrass (Lolium spp.) which do more harm than good. They have been specially bred for their vigour, ability to respond rapidly to applications of nitrogenous fertiliser and to handle regular cutting for hay and silage.

Agricultural Ryegrass is a serious invasive weed over much of our countryside where it has escaped from the confines of high intensity pastureland onto country paths, verges, moorland, any available land, where it sets seed readily and out-competes native grasses, especially in areas of high fertility.

Ironically farmers also regard ryegrass as a serious invasive weed when they are trying to grow wheat rather than livestock, as it can out-compete the cereal crop, so they attack it with herbicides like anything else they regard as a weed.

Ryegrass-dominated Urban Parks
The same applies to the large swards of ryegrass-dominated grass mixtures typical of urban parks - few native grasses, near zero wildflowers, and no chance for even grass-feeding caterpillars. Incredibly boring expanses of underused never-ending playing fields, which could easily be converted to a landscape of far greater biodiversity.

Such expanses are usually of as little interest to human visitors as to butterflies, with visitors confining themselves and their dogs to the more interesting woodland paths - if there are any - at the periphery. Most people today play virtual football at home and seek their exercise down the gym or on the golf course, not in the park as their grandparents might have done. Such large barren areas are irrelevant to twenty-first century needs and - before any developer starts rubbing their hands in glee - should be converted to areas of natural beauty with enhanced biological diversity by planting with native shrubs and wildflowers to encourage invertebrates, birds and visitors, perhaps adding in a few much-needed organic allotments.

A Ryegrass-free Lawn
At all costs, avoid lawn mixes that contain Ryegrass. Native species are much better for biodiversity and should be planted in amenity areas and gardens where a lawn is desired, along with wild flowers, to give the butterflies and moths and other pollinators a chance. If at all possible dig up the ryegrass and replace with less invasive native grasses. Ryegrass-free grass mixtures are readily available from commercial sources.

Native Grass Suggestions for Butterflies and Their Caterpillars
A typical commercial wild flower meadow mix might well contain the native grasses listed below. Beneath the name of the grass are examples of  Browns and Skippers whose caterpillars feed on them. Not the adults of course, grasses being wind pollinated don't produce nectar to attract pollinators. It's their caterpillars that are the grass eaters.

Sheep's Fescue (Festuca ovina)
Sole food plant of the very rare Silver-spotted Skipper. It also serves as a foodplant for caterpillars of the Small Heath, Gatekeeper, Greyling and Marbled White, and those of grass moths including Agriphila inquinatella.

Red Fescue (Festuca rubra) appears to be an essential part of the diet of the Marbled White, although Sheep's Fescue and other grasses may be taken. The Marbled White is confined mainly to the south of England with a few outposts dotted up as far as Yorkshire.

More difficult to accommodate are the rather more fussy Scotch Argus which seems to prefer Moor-grass or Purple Moor-grass (Molinia caerulea) although other grasses also appear to be taken, and the very rare Chequered Skipper, apparently now breeding only in parts of Scotland, which also requires Purple Moor Grass.

Then there is the Mountain Ringlet which needs Mat-grass; the Large Heath which prefers Cottongrass, preferably Hare’s Tail Cottongrass, and the very rare Lulworth Skipper for which large flowering tussocks of Tor Grass (Brachypodium pinnatum) growing in sunny, sheltered spots, are essential.

Caterpillars of the Speckled Wood also feed on native grasses including Couch Grass, Cock's-Foot and Yorkshire Fog. The female adopts the conventional approach of laying her eggs singly on grass blades rather than depositing them from the air during a fly past. She prefers to lay them on grasses growing in a shady spot rather than in an open field.

The Small Heath (Coenonympha pamphilus) is another grass-eating butterfly widespread throughout Britain and Ireland whose caterpillars feed on fine-leaved grasses like Smooth-stalked Meadow Grass. 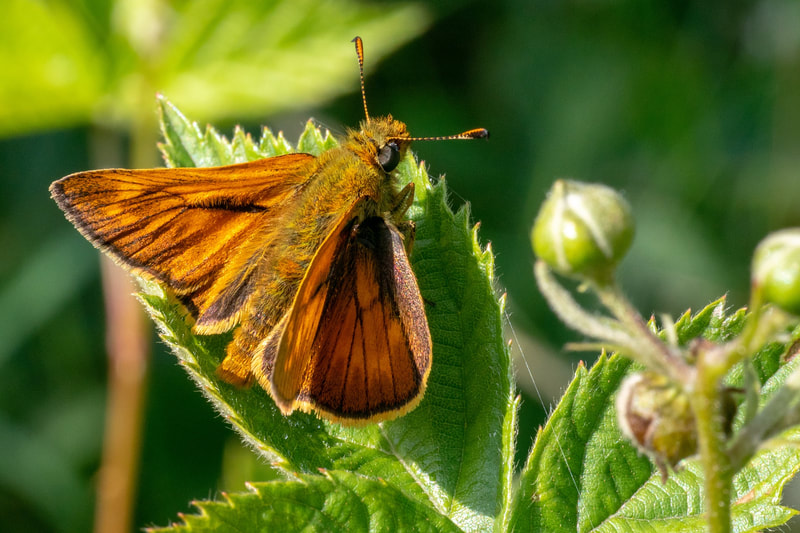 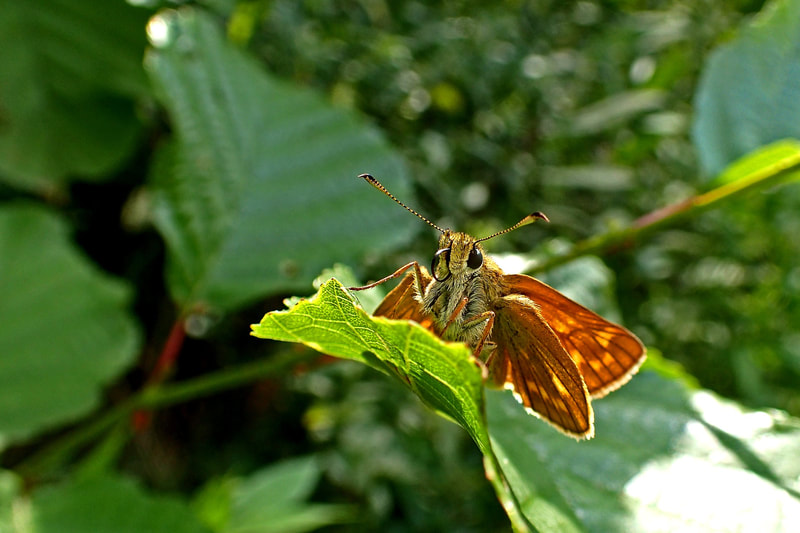 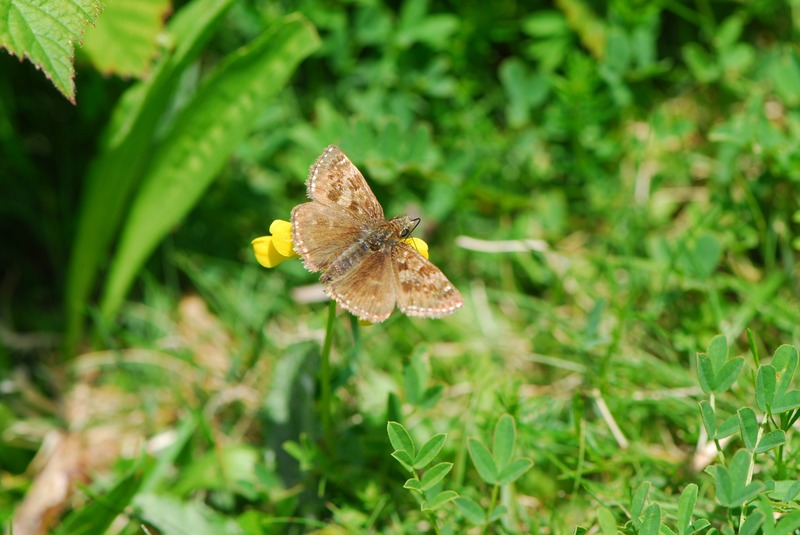 Yorkshire fog is the main caterpillar foodplant of the SMALL SKIPPER  although the female will also lay her eggs on Timothy and Wood False Brome. It lives in colonies throughout Wales and England apart from the North, but appears to be absent from Scotland and Ireland.

Cocksfoot is the main foodplant of caterpillars of the LARGE SKIPPER but False Brome is also used. It is one of the most common skippers, being found in colonies throughout most of England and Wales, but absent from Ireland and only currently encountered in the far south of Scotland.

The ESSEX SKIPPER lives in colonies in South East and southernmost part of England. Its caterpillars feed on a range of native grasses of which Cocksfoot and Creeping Soft Grass (Holcus mollis) are the ones usually used.

Not All Skipper Caterpillars Feed on Grass
The DINGY SKIPPER which lives in colonies throughout England and coastal Wales, with a few localised colonies in Ireland and Scotland shuns grass in favour of Bird's-foot trefoil.

Three Other Skippers are Extremely Rare:
AS THE GRASS-EATING CATERPILLARS AND THEIR PUPAE SPEND THEIR WHOLE LIVES IN CLUMPS OF NATIVE GRASSES IT IS VITALLY IMPORTANT NOT TO MOW OR STRIM THESE  GRASSES. EVEN GRAZING WILL KILL MOST OF THEM. HENCE THE VALUE OF TUFTS OF NATIVE GRASSES IN HEDGEROWS.
Proudly powered by Weebly