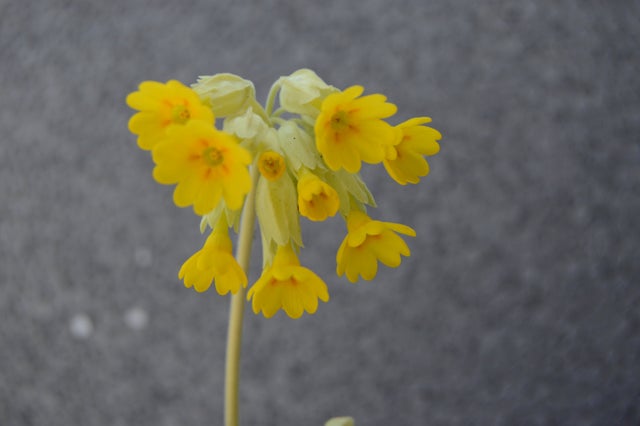 The Beauty of Cowslips

Cowslip (Primula veris), closely related to the Primrose, is a beautiful spring plant with a rosette of crinkled leaves from which arises a single stem of nodding yellow flowers. Once a very common site adding a splash of yellow to meadows, especially those on limestone or chalk, it has now been forced by the plough and herbicides to retreat to roadside verges and other bits of uncultivated land.

It gets its name not because it in any way resembles a cow but because it often appeared on bare soil due to the trampling of cattle in winter.

The flowers typically appear from April to early June and are pollinated by bees and butterflies, at a time when these insects need their nectar most. Some Cowslip plants have flowers with the pollen positioned near the top, and the stigma for receiving the pollen at the bottom, while other plants have the pollen positioned near the bottom of the flowers and the stigma at the top. This is a device for increasing the likelihood of cross pollination by bees moving from one plant to another in search of nectar and pollen.

Butterflies that depend on Cowslip

Cowslip and Primrose are the main foodplants of caterpillars of the Duke of Bergundy butterfly (Hamearis lucina), the numbers of which have declined by over 80% since 1970, not surprisingly perhaps when their main food plant has also been decimated over the same period. They are now confined mainly to central, southern England, and to locations in Cumbria and Yorkshire.

When they were abundant, not only Duke of Bergundy caterpillars but people used to eat them too as an an early source of Vitamin C, the young leaves being used in salads and the older leaves cooked. The flower petals were used to make wine. There are advertisements for both the flowers and the wine in 18th century newspapers (see the British National Newspaper Archives).

C. Clarke Nuttall in Wildflowers As They Grow, published in 1912 provides a recipe: "It is made from the 'peeps;' - that is, the yellow petal rings - in the following way:- A gallon of 'peeps,' with 4lb. of lump sugar and the rind of three lemons is added to a gallon of cold spring water. A cup of fresh yeast is included and the liquor stirred every day for a week. It is then put into a barrel with the juice of the lemons and left to 'work' - i.e. ferment. When 'quiet' it is corked down for some months, say eight or nine, and ultimately bottled." There is also a recipe for Cowslip Wine in Mrs Beeton's Jam Making and Preserves.

Cowslip flowers were also made into cordials and cowslip ale. Beatrix Potter has a charming illustration of Cecily Parsley making cowslip ale in her book Cecily Parsley’s Nursery Rhymes. Diana Astry (1671 – 1716) provides us with the following recipe for cowslip ale: "Add a peck (about 2 dry gallons or 9 litres) of cowslip pips (pips or peeps are the flower petals) to a kinterkin of ordinary ale after it has finished working. Stop it up and leave for 2 or 3 weeks." A kinterkin is a cask of ale holding 16 to 18 gallons like the one in the Beatrix Potter illustration.

So wine and ale both required a huge number of cowslip flowers; these things could be done in the days when cowslips were so abundant, but what few there are now are best left alone unless you grow your own, and what could be a better choice of flower for your own garden or greenspace.

As a start, why not purchase at least THREE of our well rooted plants in 7 cm square pots which we have grown from seed in our nursery in Cupar, Fife. When they mature, divide them up or collect more seeds for yourself to sow for the next generation. Cowslip is perennial and winter hardy in the UK so can be purchased at any time for planting out in the autumn, or spring. It will grow in a wide range of neutral or alkaline soils from loamy to heavy clay, so ordinary supermarket compost or most garden soil will be fine. As well as being allowed to grow wild or as a garden plant, it makes a lovely little gift in a ceramic pot - a tiny teapot looks especially nice.

You are purchasing three well rooted plants in three 7 cm square pots that have been grown by ourselves in Fife from seeds.

Plants are carefully packaged in clamp packs made from recycled plastic which is itself completely recyclable.

Our plants are sold purely for their biodiversity, educational and aesthetic value and no part should be consumed or applied externally unless you are absolutely certain of their safety.

Please note that our nursery is located at Cupar, our St Andrews address being for correspondence only. Plant Passport Registration Number GB-S 03473.